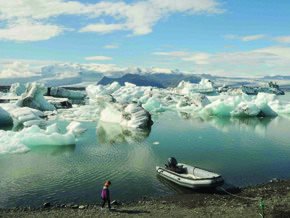 Iceland from the Sky, Colours of Iceland

In autumn, Iceland changes its colours: after weeks of permanent quasi-daylight the vegetation bursts out everywhere. Carpeted with moss and lichens, the lava flow on the flanks of the capricious volcanoes turns to fluorescent green. The same applies to the white of the glaciers and the deep blue of the fjords in the northwest.

Seen from the sky, the panorama is breath-taking… and not only over the volcanic lands of the Landmannalaugar in the centre of the island with its seemingly unreal colours.

Even though Iceland is a world apart, it is not apart from the world: for six months during the 18th century, the eruption of the Laki volcano brought about such changes in the skies of Europe that it prompted the fall of the King of France.

From north to south, from east to west, at every stage of our journey we travel an island peopled by whale fishermen, courageous coastguards, atypical ecological activists and Russian tourists who think they are James Bond.

Set in the middle of the North Atlantic, Iceland is more than an island, it’s a geological anomaly. For those who prefer nature to be raw and beautiful, the island is a formidable playground where the magma broods beneath the glaciers, where the land is gaining over the ocean or where hot water springs heat buildings, baths and swimming pools…