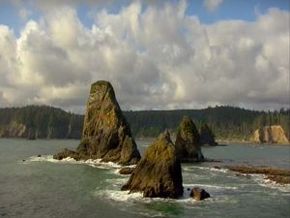 THE UNITED STATES FROM THE THE SKY, takes us from the shores of Oregon, a coastline battered by the winds and waves of the Pacific to Vancouver on the Canadian border via Seattle and the Columbia River.

The Northwest coast is one of the most spectacular and wildest marine landscapes of the United States, where nature expresses itself in total freedom.

Along the way, the film crew touches down to meet the people living along this magnificent coastline: a beachcomber in Oregon, a boat builder near Seattle, a wild salmon fisherman on the Olympic Peninsular, a lighthouse keeper in British Columbia…