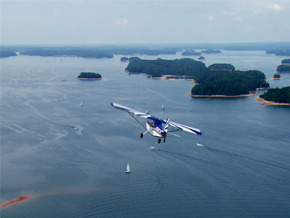 From the State of Georgia to the Gulf of Mexico, across Alabama and then down the Mississippi to its mouth, USA, THE DEEP SOUTH is a journey of encounter with those who love the Deep South. Elgin Wells combines his two passions: music and stunt flying. Pilot, musician, poet, he is one of the few in America to present nighttime aerial displays.

At Natchez, on the banks of the Mississippi, Pat Martin and Gay Guercio open the doors to Stanton Hall and Longwood, two magnificent mansions in the heart of the old cotton plantations.

On Avery Island, the descendants of Edmund Mcilhenny produce Tabasco, a simple recipe based on Mexican spices that has remained unchanged for 150 years.

In the Atchafalaya Basin, an extraordinary nature reserve that is a paradise for birds, crawfish and alligators, Roy Blanchard and Shane Doucet are fighting to preserve their identity as Acadians, descendants of the first immigrants, who still speak old French.

And finally as Hurricane Isaac approaches, a most unlikely encounter with Chris and Steve, crab fishermen in the swamps on the shores of the Gulf of Mexico.