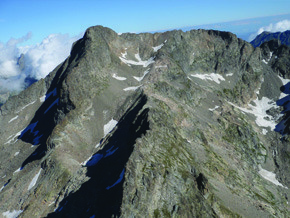 The Alpes Maritimes from the Sky

For some, it’s just the backcountry. Just some little-known, almost forgotten countryside far from the cities and swanky resorts of the coast. A distant background barely glimpsed when sailing in the Bay of Cannes or off the “Prom” the Promenade des Anglais in Nice.

For others, it is the soul, where the valleys reveal their secret riches. Here mountains rise majestically to nearly 3,000 metres, such as the Gélas in the Mercantour National Park, a peak affording a majestic view over the immensity of the Mediterranean, Cape Corsica, the Alps and Italy. There are hundreds in Nice who prefer to appreciate the sea from very high and very far: either amateur or seasoned climbers, they never praise the marine landscape more highly than from a distance after long hikes up the dry, mineral slopes of this high country.

Others, through life-style choice or economic necessity have chosen to quit the over-crowded, over-priced sea shores for the villages perched just an hour’s drive away from Nice where you would think you were in another country.

They are villagers, mountain folk, and from their many promontories they cast a different gaze on this Côte d’Azur with its blue sea that seems both so near and yet so far.

From the Tinée valley to Utelle and its Madonna, from Saorge to St-Martin-Vésubie by way of the flanks of the Gélas and its neighbouring shelters, this is a never-before-seen discovery of the Alpes Maritimes.