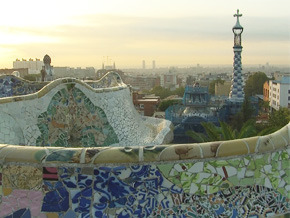 Barcelona from the Sky Newly Added

Without a doubt, Barcelona is one of Europe’s most spectacular cities, a concentration of joyous cultures, local lifestyles and marvelous neighborhood strolls.

Discover the incredible Palais Güell, an atypical architectural blend of organic forms, which the industrialist Güell commissioned from Antoni Gaudi, Barcelona’s most inventive architect. It is a visual shock and a natural stylistic extension of the famous Park Güell, with its extravagant mosaics. Our camera reveals Gaudi’s secrets as we explore little known aspects of the construction of Pedrera, the most famous and fragile house created by the Catalan architect.

Barcelona is above all a city in perpetual action. In the center of Correfoc, an ancient pagan ceremony lights up the streets during September as men dress as devils, women as witches, and everywhere above there are fireworks.

Barcelona is filled with fascinating local shops and businesses, such as the sublime Boqueria market with its multicolored hall or the flea market, Encants Market, beneath its ultramodern-mirrored roof. And a few steps away is the Agbar tower, called the suppository by locals, and created by the architect Jean Nouvel. A feast for the eyes is guaranteed in this amazing city.