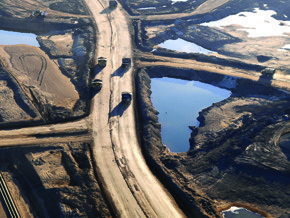 In northern Canada, Indian land is now the home to the largest industrial project in the world: the exploitation of the Alberta tar sands, potentially, the third largest source of new oil for the world. Multinationals are now producing nearly two million barrels a day and an expected five million by 2030 but the ecological cost of extraction is so prohibitive that opponents are on the rise.

The production of a barrel of crude from the tar sands is ten times more energy intensive than a conventional barrel. The pollution from this extraction threatens major climate agreements around the planet. Not surprisingly, Prime Minister Harper pulled Canada out of the Kyoto Protocol claiming that it would cost the country nearly $14 billion to remain a part of the protocol.

In the heart of the boreal forest, the Indians find their land ransacked by the oil industry. Those living near the region fear potential health problems and are concerned about the effects the oil sands development will have on their culture and life style.