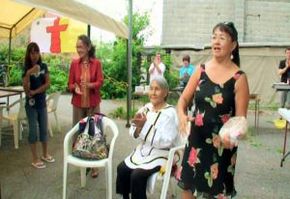 Filmed primarily in Nunavut and in three large Canadian cities – Montreal, Ottawa and Toronto, Qallunaaliaqpallianiq-Heading South explores the stories of Inuit “migrants” to the South: their dreams, their accomplishments, their preoccupations, the paths they follow and their interactions with the outside world?

This documentary offers a different point of view from the stereotypical representations of the Inuit – addiction, alcoholism, vagrancy – that we’re presented with on a daily basis. These are the representations that the Inuit are trying to overcome, while steadfastly refusing to be depicted as victims.

An example seen in the film takes place in the Montreal suburb of Villeray, where part of the population, including the Mayor, showed their opposition to a building being converted into a Health Centre for Inuit from the North seeking health care. Sensing that they were not welcome, and being a prideful people, they withdrew from the project.

As Mary Simon, the National Leader of the Inuit of Canada says: “There’s a new wind blowing over the Inuit”. A new generation, proud and determined, is seeing the light, resolutely turning to the future and all the challenges that that implies.

"Continuing with his passion for making films that expose and remove prejudices, Quebec filmmaker Guy Simoneau has created Qallunaaliaqpallianiq – Heading South, a compelling new documentary that focuses on Inuit living in southern cities of Canada"