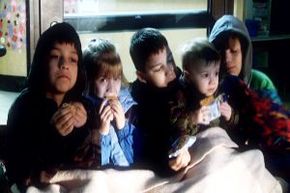 A Country's Hunger, directed by Mark Chatel, is an unusual and necessary “road movie” and documentary that focuses on the promise made to our children finally being honoured.

2009 marked the 20th anniversary of an enthusiastic and unanimous resolution in the Canadian House of Commons. The House sought to achieve the goal of eliminating poverty among Canadian children by the year 2000.

Mark Chatel decided to travel across the country to see what progress had been made in those 20 years. Suspecting that there were still many children living in poverty in Canada, he naively thought that the situation must have improved by now. But he was wrong.

700,000 of our children continue to live in poverty. How is such a failure possible in a country as supposedly rich and prosperous as ours?

To find an answer to that question, Mark went from coast to coast to talk to the parents, teachers, social workers, politicians and, of course, the children who suffer the throes of poverty on a daily basis.

He wanted to see how, as citizens of a country like Canada, we could do our part to end one of the most troubling realities of our country. Some of his observations are certainly discouraging, but others lead him to believe that the solution to end this national tragedy is less complex than we think.