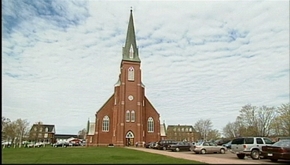 The Renaissance of the Island Acadians

It is possible for a community to lose its language and then bring that language back to life? This documentary explains how the loss of French language schools in 1968 on Prince Edward Island led to the assimilation of a generation of Island Acadians and yet how many of those same people, now parents, are leading the battle to bring French back to the island.

The film follows two mothers through their ten year struggle to obtain funding for French schools for their children. It shows how their personal sacrifices paid off with a historic win in the Supreme Court of Canada in the year 2000, a victory which gives a new generation the chance to learn the language of their ancestors.

Shot from the perspective of three families with children in the new French schools, this documentary celebrates the resilience of the Island Acadians and provides an inspiring example to French minorities across Canada.