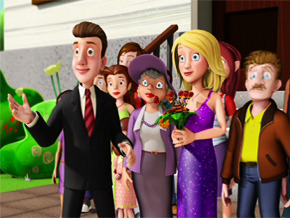 Bath Time
What is the rain cycle? Jack goes down a water drain to retrieve Sam’s missing toy and is accidentally washed out to sea. With his jetpack on the fritz, Jack's only way back is to hitch a ride via the rain cycle.

Bad Hair Day
Why doesn’t it hurt when I cut my hair? Jack thinks the kids sudden perfect behaviour is the result of brain damage from a recent haircut. So Jack retrieves their discarded hair (and some extra hair of the hairdresser’s floor for good measure) and contrives a way to plant it back into their heads and repair the damage.

Meteor Shower
What is a meteor shower? Jack decides to ‘surprise’ Nico and Dad by arranging for a meteor to land in the garden during a meteor shower. Unfortunately, Jack has to fess up that the meteor is really just a local rock when he learns that a tv crew is on its way down to authenticate it. Jack has to go find a real meteor while Nico keeps the press far away from the fake one.

Jackosaurus
Why are dinos extinct? When a mechanical dino that Jack has built as a surprise for Nico runs amok in the neighbourhood, Nico has to use his knowledge of what caused real dinos to become extinct to get rid of the 30’ rampaging T‐Rex before the cops arrive.