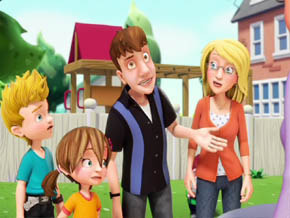 The Rubber Prank
What is rubber? When Jack's face is caught on camera, his pals must make a rubber mask of Jack's face to convince everyone the 'alien sighting' was just a prank.

Hide in Plain Sight
How do octopuses camouflage themselves so well? When Rocket inadvertently gains camouflage abilities, the gang suddenly has their hands full searching for an almost invisible alien dog that thinks he’s playing hide-and-seek!

G-Force
How does G-Force work? When Jack’s ship crash lands on a deserted planet, the pals are in danger of being trapped there forever by its super-strong gravity.

Vertigo No-No!
What is vertigo? Jack brings an alien gizmo to Earth to speed up Nico's slowwww internet which causes everyone around to suffer vertigo. But the device’s automated defense system prevents Jack from getting close enough to shut it off!

Adrenalin
What is adrenalin? A bizarre alien reaction to a bee sting causes Rocket to inflate like a giant floating balloon—and Jack must find a source of adrenalin to help return his pal to normal.