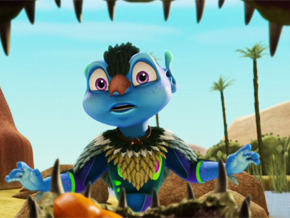 Eel‐ectricity
How much Electricity does an Electric Eel have? When Rocket accidentally drains the spaceship of power somewhere in the Amazon, Jack can risk his job and call High Command for a boost or try to catch some electric eels and harness their electricity instead. Jack chooses the more pleasant option but is in for a series of shocks.

Bite Makes Right
Which Animal has the Strongest Bite? Jack decides to an indestructible chew toy he’s made for Rocket on the only animal with a similarly strong bite; the crocodile. The toy passes the test, but unfortunately Chip is mistaken for a rock and swallowed by the croc. Now Jack has to find a way to get her out… without either of them getting chomped.

A Sticky Situation
How Does Glue Stick Things Together? Jack drops a tube of super alien glue which results in Yoki and Sam getting stuck together, Chip, Rocket and Nico being stuck together and a miniature Jack being stuck to a jar of peanut butter which Dad has just pulled out for a snack.

Feeling Blue
Why do you get a Sunburn? After Jack learns about the dangers of sunburn, he makes the kids the ultimate sun screen….which turns them blue. The kids must avoid Mom and Dad while Jack and Chip figure out how to reverse the sun screen’s effects.