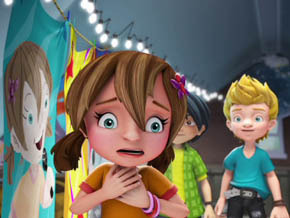 Hoarse Whisperer
How do we talk? After Jack causes Sam to lose her voice just before a singing contest, the aliens shrink down and explore her vocal cords in an attempt to figure out what the problem is.

Taste-bud Buddies
How do taste buds work? To help his pal enjoy more flavors, Jack modifies some of Nico’s taste buds, causing his tongue to swell up to giant proportions.

Cough Drop-ins
Why do we cough? When Yoki accidentally inhales a miniature Rocket, the little alien dog gets stuck in his lungs, prompting a desperate rescue mission by his miniaturized alien pals!

Lightning Strike
Where does lightning come from? When Jack sets out to create a lone bolt of lightning, he accidentally triggers a dangerous storm that quickly gets out of control.

Invasive Invaders
What is an invasive species? When Jack brings an adorable alien pet to Earth to show the kids, the fast-reproducing creatures start taking over the entire ecosystem.