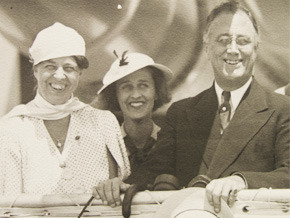 Eleanor Roosevelt, the wife of President Franklin D. Roosevelt, changed the role of the First Lady through her active participation in American politics. In times of great difficulty for the USA - from the crisis of the early 30's to WW2 -, this role provided her with a challenge and combat that she would never shun nor neglect.

Between 1932 and 1945, Eleanor Roosevelt invested the function of First Lady with an unprecedented political dimension. She would become the inspiration and figurehead for a new generation of women determined to carve out a place in a political world reserved exclusively for men. Fifty years after her death, newly-discovered documents enable us to gain a clearer understanding of her exceptional life. In the present political climate she remains an example for every woman wishing to embrace a political career.