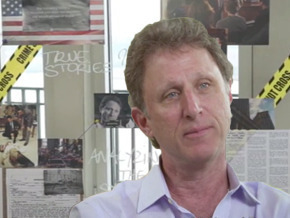 Actor by training, Matthew Penn began directing theatre before being hired as a director on a daytime soap opera for which he made over a 100 episodes. Upon joining the Director's Guild, Matthew was introduced to Edwin Sherin, the producer of Law and Order who hired him to direct the series and he knew from there on that's what he wanted to do. He went on to direct NYPD Blue, Blue Bloods, Damages and Royal Pains.