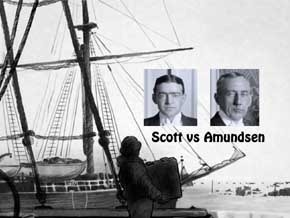 In December 1911, in the name of geographical exploration, pride and their kingdom, Robert Falcon Scott, a British officer, and Roald Amundsen, a Norwegian adventurer, completed an epic race to the South Pole. Amundsen was the first to plant his flag at the southernmost tip of the globe.

Their strategy, resources and philosophy were opposed in every way. Thanks to exceptional archives of the expedition, testimonies of great explorers, historians and scientists, as well as motion graphics in black and white, this documentary tells the story of this incredible duel.

Without ever crossing each other’s paths, Scott and Amundsen challenged the most hostile territory in the world: thousands of kilometres of ice, mountain barriers, winds of up to 300 km/h, temperatures dropping below minus 40 degrees Celsius. Amundsen was first to finish even if it meant eating his own dogs. Yet Scott, who came second and froze to death, stole the glory from his Norwegian rival: the tragic writings of the Englishman, found on his dead body, made him a legend. Amundsen, despite being the victor, would never be the hero Scott became for posterity.

A century later, between the victor and the hero, who really won?

Duel at the South Pole - Scott-Amundsen