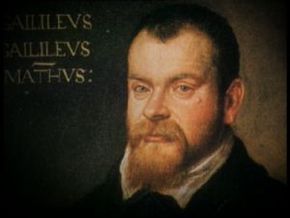 Galileo, the Birth of a Star

In 1633, in Rome, a man appears before the court of the Inquisition. He is charged with maintaining that the Earth orbits around the Sun.

During several clear winter nights in 1610 – using an astronomical telescope that he himself had perfected – the mathematician, Galileo, observed the mountains of the Moon, the phases of Venus and Jupiter’s satellites. So the sky is no longer that perfect, smooth, unchanging sphere that it was believed to be: the sky and the Earth become one. The Earth is no longer the center of the universe, but one planet orbiting around the Sun, amongst other planets – themselves also accompanied by moons similar to our own satellite.

But all these ideas are incompatible with the Church’s dogmas, now even more punctilious, as the Church has barely recovered from the upheavals caused by the Reformation. Battling with an intolerant clergy, universities that refuse to acknowledge the findings, abandoned by the most eminent of his protectors in the person of the Pope, Galileo, presented with instruments of torture, recants before the court.

It doesn’t matter: the scientific revolution is on the march.