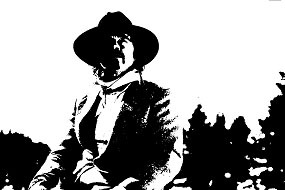 The Legend of Cataline

The Legend of Cataline is the story of one of the most colourful and romantic legends of British Columbia's gold rush era. This documentary makes use of archival pictures, dramatic recreations and interviews with specialists of the era to recreate the story of Jean Caux and a day in the life of a gold packer.

Jean Caux ran a pack train in Hazelton and around the Skeena River for more than 50 years, making him the first and last packer in the area. He was also one of the first francophones to live in B.C., and by virtue of his work and life span, literally paved the way for many pioneers.

He was born in Béarn, in the southwest of France, near Catalonia, for which he was nicknamed ''Cataline''. To communicate, he used a language he invented, which was a mishmash of Indian, Chinook, Spanish, French and English words. Blessed with a phenomenal memory; he could calculate all his expenses, and pay his men off the top of his head without ever making a mistake.

Cataline was a man of integrity, a successful packer and fair in his dealings with the Indians.

The adventure and excitement of the gold rush and the life story of a francophone pioneer come together to fuel the imagination of people of all ages.