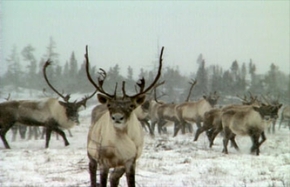 It has a land mass the size of France, yet you could squeeze its population into a large stadium. It is as empty and inhospitable as Mars, yet its natural riches and ancient culture, make it impossible to ignore.

Welcome to Nunavik, a sprawling territory in northern Canada. With breathtaking footage shot across Canada's Arctic territories, Nunavik examines the challenges facing this vast frontier land poised on the threshold of sweeping changes.

From the thrill of a traditional Beluga whale hunt to the awesome sight of the world's largest herd of land mammals, from the mystical culture of the region's Inuit inhabitants to the continent's most elaborate hydro-electric complex, Nunavik explores this untamed landscape in all its striking contrasts.