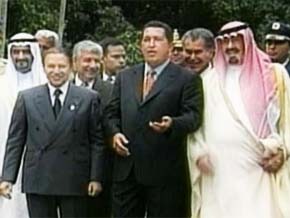 By the 1930’s most of the consuming nations were in the Northern Hemisphere, yet the vast reserves of black gold were mostly to be found in the Southern regions of the Planet.

The Majors, in their quest for black gold, resorted to methods worthy of the ruthless diggers of the California Gold Rush and likewise, they competed fiercely with each other. The seven biggest formed a cartel called The Seven Sisters, putting an end to their fratricidal struggles, steadying the markets and last but not least, fairly sharing the oil cake among themselves.

Innovations in geological exploration led first to Mexico and then Venezuela, who, like the others in their region, were still colonies or unstable, with easily corruptible, unsteady governments.

Venezuela became the first exporting country in the world. Its leaders became puppets of the Anglo-American Majors. Venezuela got 10% of the revenue, mostly channeled into the hands of the corrupted ruling class. Little if any of these revenues made their way down the food chain of the impoverished nation. Strikes erupted in 1925 and 1938, the very first to take place in the world of Black Gold.

Rebellion and outburst also took place in Mexico, ending with a real blow when President Cardenas nationalized Mexican Black Gold, heralding the struggles to come as the third-world producing nations attempted to wrangle control of their national wealth from the Majors.

In these early years, production of Black Gold in Iran and Iraq remained in the hands of the English Companies under similar conditions.

The importance of Black Gold during WWII was five times greater than in WWI. These reserves were to become an essential advantage for the Allies during WWII as Germany’s eventual defeat was in certain part brought on by their significant lack of supply.