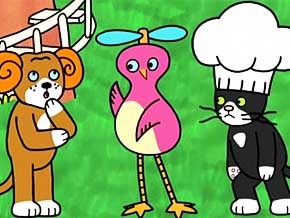 Blue Torteloony / A Day at the Beach

Blue Torteloony: Gofrette has eaten the special blue torteloonies Garbanzo gave him for safe keeping and the cooking contest Garbanzo needs them for is tomorrow! Gofrette, with Fudge and Ellie, makes every effort to find some replacement torteloonies, but, when they eventually do, how do you make them blue? Meanwhile, Ellie attempts to tame Fudge’s unwieldy ears once and for all: something that’s even more impossible than finding blue torteloonies before a cooking contest.

A Day at the Beach: Gofrette, Fudge and Ellie take a trip to the beach and get plenty of sun and have lots of fun until they’re swooped away by the tide during a game of water volleyball. Meanwhile, Merton Maroni is out and about taking silly candid photos for the front page of the local newspaper. Fudge would stand a better chance of swimming back to shore if he wore one of the ridiculous mermaid suits but not as much as he’d hate to see a picture of himself on the newspaper’s front page.