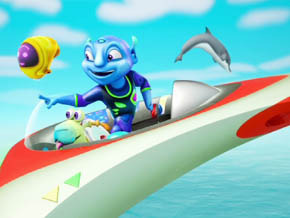 Jack and the Dolphin
Are dolphins one of the smartest animals? Do they have the ability to learn behaviours, communicate, and solve problems? Jack must find a young aquarium dolphin that he accidentally released into the ocean before the gentle mammal gets into trouble.

Hot Dog!
What makes spicy food spicy? After Rocket eats too much spicy food, the suddenly-smoke-breathing alien dog has everyone yelling ‘fire’!

No Fuel Like and Old Fuel
What are biofuels? When Jack's ship runs out of fuel, the pals race against time to make enough bio-fuel for Jack to get home... before Mom and Dad discover his spaceship hidden in the garage.

The Memory Game
What is amnesia? After Jack bumps his head, he becomes convinced he's a human… free to walk about on Earth and interact with its inhabitants, starting with Nico and Sam’s parents!