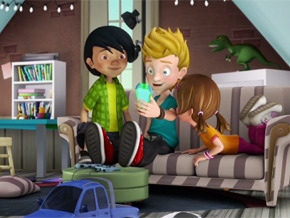 Do the Twister
What’s it like in the eye of a tornado? –When Jack gets caught up accidentally in a tornado the ship’s contents are scattered including Jack’s new gadget, the Enlargerator. Jack goes back into the tornado to search for the Enlargerator, not realizing that an unsuspecting Mrs Weebler has already found it.

Swimming with Aliens
How do sharks hunt? Jack reprograms the ship so it can be controlled by Nico’s video game‐console to help make the kids homework on the Great Barrier Reef more fun. But the fun stops for Jack when Dad spies the cool ‘videogame’ and takes control of the ship, leaving the defenceless aliens trying to get it back before a hungry shark gets them.

Web of Trouble
Why don’t spiders get stuck in their webs? Jack is horrified when he accidentally tears a spider web, so decides to make the poor little spider a replacement. But making a web is trickier – and stickier‐ than Jack had thought and results in the aliens and all the garden furniture stuck in a giant sticky web ball. Forced to shrink down so Dad doesn’t see them, the aliens have to find a way to get out of their predicament before the original spider makes a meal of them in its new web.

Let’s Go Batty
How do bats navigate in the dark? While trying to download instructions into Yoki’s brain from Chip, Jack accidentally presses the wrong switch and the pair do a data brain swap instead. Now Chip thinks she’s Yoki and Yoki thinks he’s Chip. And the only device that can fix the problem is now stuck to a fleeing bat’s antennae. Jack has to team up with Chip (who thinks she’s Yoki) while the kids try to keep a suspicious mom away from Yoki (who thinks he’s Chip).