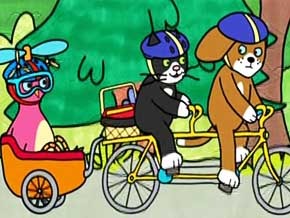 The Snail Race: It’s looking like Gofrette is going to win the Snail Grand Prix until his prize snail racer takes ill just before the race. Efforts to find a replacement snail are fruitless until Gofrette finds out his snail has babies and that one of them is very fast. Whether it will be fast enough to beat Marcel Strong Arms’ suspiciously looking prize snail will only be determined when the race is on.

Bike Rally: When Quicky Lorraine puts on the Zanimo Bike Rally where all the contestants pick up garbage around Zanimo, Hamlet and Fudge take it far too seriously and want to win. While everyone else is having fun picking up trash Hamlet goes out of his way to bend and break the rules as Fudge learns the hard way, via a sprained ankle, about how to enjoy himself.