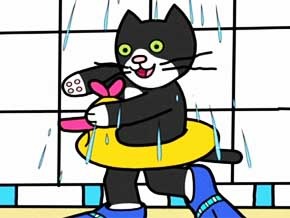 The Diving Lesson / Silence... and Action!

The Diving Lesson When Garbanzo asks Gofrette if he will dive at El Teatro Zanimo Gofrette agrees even though he doesn’t know how to dive. Fudge is happy to give Gofrette a diving lesson but before they can even
get to the swimming pool Fudge has to deal with strange sounds coming from his ZanimoWagon. And then there’s still the matter of diving. Gofrette finds that it’s a lot harder than it looks but he still gives it a major Gofrette effort!

Silence... And Action!: When Gofrette, Fudge and Ellie don’t get to see the monster movie they’ve been avidly anticipating Gofrette decides they’ll just have to make their own monster movie. After getting Wendell to be their Big Bad Wolf monster a fall into the swamp turns Fudge into a scary swamp monster…with Gofrette filming it all on his video camera!