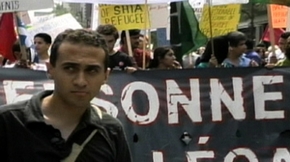 Being Osama is a documentary that explores the lives of Arab-Canadians named Osama and the changes that have occurred in their lives since 9/11.

The film sheds light on their struggle to fend off the negative connotation of their name and offers a deep look into the lives of their families and their environments as they prepare for the next year of hardship and hope.

The film is also a window into the little-known world of Canada's Arab communities and the challenges they face with integration and acceptance as the Middle-East continues to boil.

BEING OSAMA will challenge the often-general stereotype of being Arab. Through a wide range of depicted personalites who share the same first name yet differ in age, background, look and political opinion - the film will explore the reality of the obscure Arab community in Canada.

It will highlight the saga of these less fortunate individuals to reinstate their lives in society as valid Canadian citizens and closely document their personal attempts to outlive the political caricatures they and some in their community have become due to their name, religion and ethnicity.