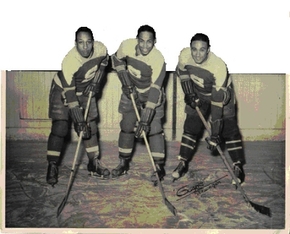 Too Colourful for the League

When Jackie Robinson broke baseball's colour barrier in 1947, he permanently paved the way for Blacks to enter Major League Baseball and eventually dominate the sport. Hockey's colour barrier would not fall as easily.

Too Colorful for the Leaguefollows the crusade of retired Montreal Immigration Judge, Richard Lord, to have Herb Carnegie elected to the Canadian Hockey Hall of Fame.

Carnegie starred in the Quebec Senior League during the 1940's as center of the ''all-coloured line'', winning three consecutive MVP awards in the Quebec Provincial League, then one step below the NHL.

According to renowned NHL referee Red Storey and Carnegie's former teammate Jean Beliveau, any member of the line could have played in the NHL and Carnegie would have been a superstar, but racism kept them out of the top league.

Storey, who refereed games involving the all-coloured line during the 40's, joined Richard Lord in lobbying for Carnegie's induction.

The film contrasts Carnegie's career with a top black junior prospect Seneque Hyacinthe of the Val D'Or Foreurs, the only black player drafted in the NHL in 1999.

It also follows the efforts of Willie O'Ree, who is now Youth Director of the NHL's Diversity Task Force which was established several years ago to increase minority participation in the sport. Also featured are current black NHL players such as Mike Grier and Georges Laraques.