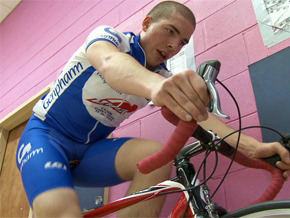 The Tour de l’Abitibi is the world’s longest stage race for junior cyclists, ages 17-18. Each summer, for over 40 years, more than 150 teens from all walks of life, and from the four corners of the world, converge in Abitibi, in northern Quebec, for five days of intense racing at high speeds. For most of these teens, it is their first taste of an international competition. They are competing against the best, all the while measuring their chances of one day being part of one of the most prestigious cycling competitions in the world: Le Tour de France.

This documentary follows the journey of the four cyclists in the pack: Danny Finneran from California, Arnaud Jouffroy from France, Simon Honour from New-Zealand, and Karl Steppan from Canada and gives the viewer an intimate look at the their hopes and dreams.

The documentary also reveals the role trainers play. Most are former cyclists themselves. They know first-hand how these teens can accept many a sacrifice when they are highly motivated.

« Dreams On Wheels » is a very human story that reveals the determination, emotions and dreams of these young athletes.

English and French versions on the same DVD