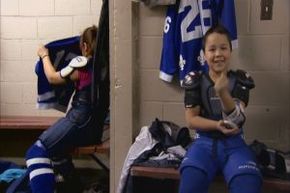 Joé Juneau, a native from Pont-Rouge in Quebec and Olympic medalist is one of the few professional hockey players to hold a university degree. He was elected by La Presse and Radio-Canada as Personality of the Year in 2007 for his implication in Nunavik.

Since 2006, he has been working as recreation consultant in Kuujjuaq and the Canadian media has made much of the presence of Joé Juneau in Nunavik but the focus of this documentary is not Joé Juneau but the kids he coaches as part of a program for Inuit youth. The True Winners presents the reality of this program by living it from inside.

We follow the kids through the 2008-2009 season of the Nunavik Select Pee-Wee team, from the very first training camp in Kuujjuaq all the way through to the Quebec International Tournament. Here, hockey is more than just a sport. Here, it is a tool to fight the high dropout and crime rate and to stimulate these young Inuit children’s sense of leadership. The True Winnersshows how big the challenges are and at the same time how a simple hockey program can definitely have a huge impact on the future of young Inuit children.