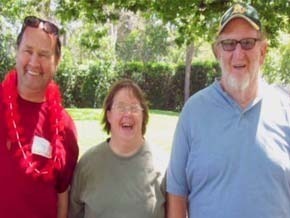 Lily's enormous spirit and openness in discussing her situation provide viewers insight to the possibilities and challenges of living with Down Syndrome. The four part series chronicles the challenges and joys of this remarkable woman. Each film is approximately fifteen minutes in length and documents her living situation, interpersonal relationships and activities. Lily narrates along with her mother and support staff.

1. Lily: A Story About a Girl Like Me
Lily was ten and in third grade when this, award-winning production was made. She was a pioneer for mainstreaming due to her district’s lack of other facilities for her. We see her in her classroom and playground as well as at home, coming to terms with the academic and social pressures upon her. Lily’s emotional strengths which will serve her so well in the future are already apparent in this loving documentary, portrait of a child who happens to have an anomaly in her chromosomes. (1976) 14 min.

2. Lily: A Sequel
Lily was twenty when most of this video was shot. The video begins with scenes of her triumphant graduation from high school and chronicles her current life as a restaurant worker and resident of a group home. Lily’s ease in front of the camera allows viewers to share her delights in her achievements but also her poignant longing for an even more mainstream life. She expresses her desire to live independently and to have a boyfriend. Her mother expresses her concerns about the realities of more independence for Lily. (1988) 15 min.

3. Lily at Thirty
Lily now has her own apartment as part of an independent living program and is working in a supermarket bagging groceries. She is seen interacting with customers and staff there and in her apartment with her friends and family. With her caseworker, Lily deals with the realities of bill paying and menu planning. In a bittersweet juxtaposition, the video shows Lily celebrating her brother’s wedding and then alone in her room working on her own written fantasy tale of being a popular girl in an active high school. She endears herself to viewers in her frank discussion of what her disability means to her. (1997) 14 min.

4. Lily: We Are All Getting Older
This latest version finds Lily at 49 years of age. The film captures her sweetness, good humour and comfort in the life her family and professionals have supported. She is seen in her own apartment, at work at the local grocery store, a position that she has held for over 20 years and travelling to New York.

Lily is now facing new cognitive and physical losses related to aging and we sense the understandable concern in the voice of her mother who narrates the film. Her memory deficits are best illustrated in a sequence when she is prompted to relate the experience of being lost in a very familiar neighbourhood.

Will this affliction, tentatively diagnosed as Alzheimer's rob Lily of her independence and appealing character traits viewers have seen unfold in the previous three longitudinal portraits? (2014) 14 min.