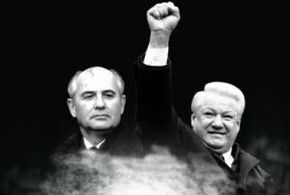 The Last Days of the USSR

Moscow, 31 December 1991: the Red Flag of the Kremlin is pulled down and replaced by the three-coloured banner of Russia, marking the end of the Soviet Union and of its ideologies. Illustrated with testimonies from top protagonists and Mikhail Gorbatchev himself, the documentary recounts, day by day, the critical last two years that led to the fall of the largest and one of the most totalitarian empires of the 20th century.

Through exceptional footage, for the most part unseen before, the film sheds some light on the political turnarounds, breaches of alliances, treacheries, coups d'état, physical threats and lies among those who plotted to stop or caused the inexorable collapse of the Soviet Regime, allowing Boris Yeltsin, the first President of the Russian Federation, to rise to power and to open a new era.

Last Days of the USSR