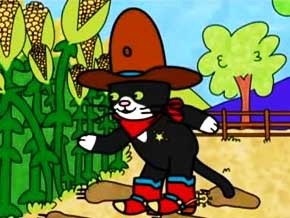 Zippety Hair Do Day: When Ellie goes to the beach for the day Greta becomes head hairstylist with Gofrette as her assistant, and the town’s hairstyles take a crazy turn! After a TV reporter passing through town wants to film the crazy hairstyles for his TV show Gofrette finds out that the TV reporter has cancelled his video shoot with a very disappointed Garbanzo. Gofrette comes up with a plan to get Garbanzo his video shoot back that involves all of El Teatro getting their hair done!

Ride 'Em Cowboy: It’s the day of the Zanimo Rodeo at Bessie’s ranch and everyone is counting on Moocher repairing his mechanical bull before the bull riding competition. Moocher’s bull, however, is just a little too wild for a rodeo. Meanwhile, Bessie has blamed Wendell for eating her missing jumping bean muffins and has no idea that it could really be Moby Bear, who, incidentally, just might end up being a strange but great rodeo bull.