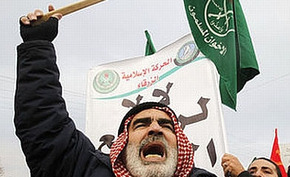 Created in 1928 during a period that witnessed a revival of religious fundamentalism and armed combat against Western, and in particular British, occupation of the Arabic peninsula, the Muslim Brotherhood developed a religious ideology in reaction to Western values perceived as an effort to destabilize and dominate the Muslim world.

Today these ideas have been brought to power, in Egypt, where the Muslim Brotherhood was born but also in most of the countries of the “Arab Spring” which have deposed aging nationalist dictators through popular uprisings.

Initially keeping a distance from popular demands for democracy, the Brotherhood has benefitted from the first democratic votes. But will it be the first to put an end to democracy?

To understand the movement today we look back at its history and ideas through its leaders and expert analysts.