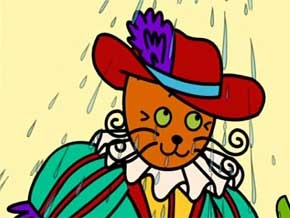 The Barber of Zanimo / One Silly Fusilli Cat!

The Barber of Zanimo: Garbanzo has made Gofrette the director of the opera at El Teatro Zanimo, and Greta is his star diva with a serious attitude. The night before the grand opening Greta loses her voice and Gofrette and Fudge must find a replacement. A fabulous mystery singer was heard from a distance but will they find her or him before the opening performance?