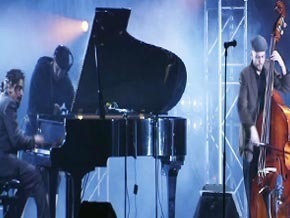 They call it new tango and for this group of young, gifted musicians, new is an understatement. The sounds rippling out of Argentina today have nothing to do with your father’s tango or even the strains you might hear at the tango dance school down the street. The nascent, percussive music being played in little clubs and on street corners is more world beat than tango. Full of anger and tragedy, jazz rhythms and rock beats, new tango music pulsates like Buenos Aires itself.

Tango’s Revenge tells the story of this musical revolution and how a group of gifted, young artists have taken as their mission to redefine the sound and culture of one of the great musical genres of the world – tango. Part of the wave of progressive ideas that is sweeping through Latin America, these musicians see their music as a way to restore pride and independence to their beloved Argentina. For these young men and women, the battle cry is “tango or death.”

Keying on Julian Peralta, the genius and driving force behind the creation of a whole movement of young tango musicians called la máquina tanguera, the film looks at the sacrifices and determination of these young artists as they struggle to survive in Buenos Aires, a city given over to “souvenir tango,” the glitzy, schmaltzy kind of tango music and dance that began flourishing in the early 80’s and has since taken over the city.

Caught between the lucrative commercial tango for tourists and the burgeoning electronic tango sweeping the world (Gotan Project in Paris, Otros Aires in Barcelona...), groups like Astillero, Orquesta tipica Fernandez Fierro, Ciudad Baigon and others, soldier on, trying to make tango truly popular once again with Argentines, as it was before decades of military rule under which the music was banned.

In the spirit of Buena Vista Social Club, which introduced an amazing group of Cuban jazzmen to the world, Tango's Revenge introduces to a large audience a group of formidable young musicians, as well as the city that nurtures them, Buenos Aires, and plunges us in the heart of Argentina today.