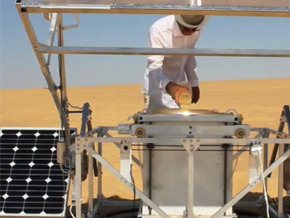 Fire produces heat and light. It is naturally associated with the sun. At the heart of the solar core, the temperature is 15 million degrees Celsius. Although the temperature of its radiation on Earth is much lower, its energy potential is colossal and infinite. It warms us and gives us light and without it life would be impossible on Earth.

Little valued for decades in favor of fossil fuels, solar energy will be, according to several specialists, the most exploited energy source of the future. But when scientists tackle this ball of fire, they have to deal with two major problems: its intermittence and the power of its heat.

Researchers have taken up the challenge and are now working at mastering these two phenomena. Some do not fear the heat of the sun and exploit it to the maximum thanks to concentrated mirrors, others get closer to it by trying to capture the power of the rays in the stratosphere, while others take advantage of the natural phenomenon of photosynthesis.