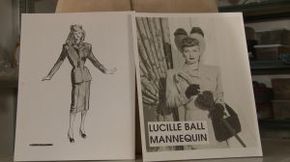 The doors of the mythical Hollywood studios enclose a great deal of forgotten treasures. Amongst these gems of the 7th art is the infamous white dress that Marilyn Monroe wore in "The Seven Year Itch" or Humphrey Bogart’s trench coat in “Casablanca”…

These clothes carry the aura of the stars that wore them and characterize a turning point in American cinema history. But in the shadow of each legendary pieces of clothing is a formidable artist… These “costume designers” managed to turn Hollywood’s actors into figures of style and elegance but many never received due recognition for their work.

This "Road Movie" follows the young French actress, Moon Dailly as she goes looking for these departed virtuosos and those who knew them in order to enlighten us on an important part of Hollywood’s history.