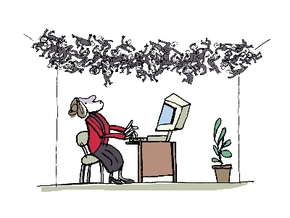 There is no question women have made progress in breaking through the infamous ''glass ceiling'' over the past decade but, whenever power and money come together - no matter what the profession - women still remain notably absent.

In the film, former Canadian prime minister, Kim Campbell, says, ''I don't think men feel they have a divine right to rule, but they never question whether that's an appropriate role for them. But why would they, since the vast majority of people who hold positions of power are men!''

Laura Liswood, who founded the Council of Women World Leaders, observes: ''There's no such thing as a 'glass ceiling', it's really just a thick layer of men!''

Although women make up more than 46 percent of the labour force in Canada, less than half of all public corporations have any women on their boards. What is it about women that blocks their progress? Do male-dominated work cultures drive out women who don't adopt the values and behaviour of masculine identity in the work place?

Her Brilliant Career examines discrimination in the workplace and politics, and introduces the viewer to a controversial program for women executives.

Executive coach Jean Holland developed a unique workshop in California to help ambitious female executives get ahead. Known as the 'Bully Broads' program, its premise is that women must modify the appearance of aggressive behaviour in order to make it in a man's world. Although some women attack the program as anti-feminist, Holland claims 85% of her graduates get promoted within a year.