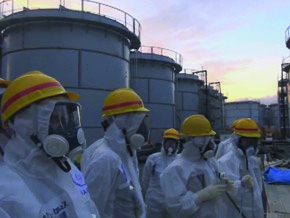 On March 11, 2011, three of the four reactors at the Fukushima Daiichi nuclear power plant exploded. The nuclear disaster «officially» caused the death of two workers at the plant who died of leukemia, one of the side effects of high levels of radioactivity.

But three years after the disaster, the truth is slowly surfacing….

The first patients, mostly children, have developed thyroid cysts. Possibly hundreds of thousands of people would have been infected ...The consequences are not only dramatic for Japan but radioactive particles have crossed borders, transported by air and water. On the west coast of the United States, some fish caught in the Pacific also bear traces of contamination. In Europe, concern focuses on products imported from Japan. In France and Switzerland, numerous tests are frequently conducted to ensure that radioactive food does not enter the market.

Who are these sick children? What is the real extent of the contamination - for humans and the environment? Why does the Japanese government refuse transparency? Who are these citizens, journalists, or doctors from Japan, the US and  Europe who are fighting for the truth to be known?

An investigation into a nuclear scandal ...