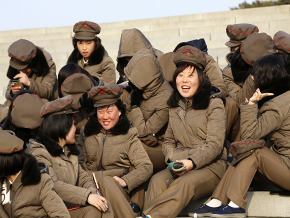 For 60 years, Korea has been divided into two states, two diametrically opposed societies. How did this state of affairs come about? Is reunification still possible?

On each side of the unbridgeable DMZ, the military and ideological wall symbolizing the separation, two political systems have developed in absolute opposition. There is no lack of North-South antagonisms. In the North, a one-party dictatorship, self-sufficiency and the nuclear arms race while the South has spawned Westernization and a fast growing economy.

Two Koreas that share the dream of reunification, despite incessant diplomatic tensions. Attempts to reunite them are in a constant state of flux due to political, geostrategic, national and international interests.

Can the reunification of the two Koreas be achieved without the consent of the great powers and their local interests? What if the solution was to come from the Korean's themselves, a policy of peaceful and long term reunification, away from divergent and changing interests of Washington, Beijing, Moscow and Tokyo.

In this 2 part series, both South and North Koreans have agreed to tell the history of the Korean peninsula.