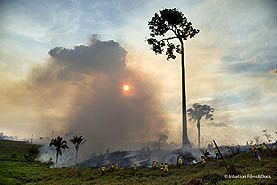 At the end of this first decade of the new milennium, a turning point has been reached in the story of the Amazon rainforest. As the world wonders how to tackle the challenges posed by climate change, the President of Brazil, Luis Incacio Lula da Silva, makes a bold announcement at the Copenhagen Conference on Climate Change, in November 2009 : the reduction in deforestation that Brazil envisages between now and 2020 will decrease Brazil’s emission of greenhouse gases by as much as the total reduction proposed by the U.S. for the same period!

This ambitious commitment made by Brazil is only possible because of the new policies of control and monitoring which have been put in place over the last two years. A totally new situation is beginning to take shape, one that will attempt to transform the future of the rainforest. It is this new reality that is the subject of this film.

From contrasts to contradictions, from best to the worst of humankind, of great commitment and of lingering impunity regarding the conservation of the rainforest, THE FINAL FRONTIER takes us thousands of miles across a territory of which almost one third has never been properly charted.

Huge political, socio-economic and human issues are at stake in what is, in fact, a vast open-air laboratory where the future of Mankind –or a large part of it – is being shaped.

The countdown has begun in the Brazilian rainforest : on one side, the Indians and traditional forest-dwellers who hope they can make their livelihood out of living trees, not dead ones. And, facing them, the men and companies who continue to see the Amazon as a source of endless – but clearly finite –wealth.