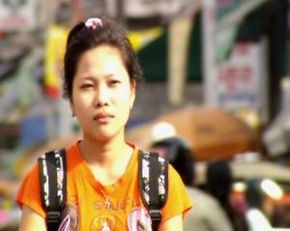 Cambodians over the age of 40 are all survivors of the great national trauma that was Pol Pot and the Khmer Rouge. A quarter of the population did not survive.

After her brother’s death, Thida, a young Quebecer, whose parents survived the red regime, travels to the land of her ancestors, in order to understand what lies behind the Malay family.

Her trip to Cambodia coincides with a trial, sponsored by the United Nations, of five former Khmer Rouge that plunges the country into the heart of its deepest wounds.

Despite the difficulty to talk about these years of fear and submission, she meets people who open ever so slightly and with much emotion, to this young woman who is trying to understand what horror comes from the venom that has "poisoned" her family, and injured her parents forever.

“It looks,” she says, “as if the survivors, the former tormentors and the generations that follow continue to be victims of this human atrocity. And I feel strangely at my place among them.”

Amongst the visits of historic sites and moving encounters with survivors (including one of seven survivors of the infamous prison S-21), Thida meets two of her uncles, one who did not experience the Khmer Rouge regime and partially accompanies his niece on her journey and the other who in his own way is seeking to rekindle his country’s national dignity.