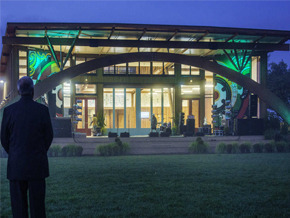 Ever the Land Newly Added

Ever the Land explores the sublime bond between people and their land through a landmark undertaking of design and construction by one of the Aotearoa New Zealand's most passionately independent Maori tribes, Ngai Tuhoe.

For the past 150 years, longstanding grievances over extreme colonisation tactics such as illegal land confiscation and scorched earth policies have defined the relationship between Tuhoe and the New Zealand government. Then, in 2014 history was made: Te Urewera, Tuhoe's ancestal homelands were returned. The New Zealand government gave an official apology and Tuhoe built the first ever "Living Building" in Aotearoa.

Conceived as a testament to Ngai Tuhoe values and vision of self-governance, the new building is the binding character in this observational documentary. Its creation immerses us in a culture of people closely entwined with the land and an architecture distinguised by its intergrity with the environment.

“Ever the Land has been made with finesse, sensitivity and clear eyes”  Vancouver International Film Festival
“It was a profound experience that deeply affected both my hear and mind. ” Andrew Johnston – Rip It UP Magazine
“An impressive little film that deserves attentions.” Peter Calder, NZ Herald “gorgeous, elegant and breath-haltingly profound” Liam Maguren, Flicks NZ