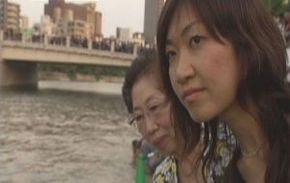 In the face of a potential nuclear renaissance, this passionate and deeply moving account explores the legacy of nuclear arms in Japan, the Marshall Islands, French Polynesia, New Zealand, and around the world. The film features Noam Chomsky, Hans Blix, Judge C.G. Weeramantry, Arjun Makhijani, and Douglas Roche.

With the reality of a nuclear threat more and more present - especially because of recent U.S. politics – Maki, the granddaughter of a Hiroshima bombing survivor, strives to keep the memory of the horror alive so that history is not repeated.

Evelyn, originally from the Marshall Islands and exiled in Honolulu, is the adopted daughter of a woman irradiated by a U.S. thermonuclear bomb. Not only has she lost her home, she lives with the nightmare of genetic malformations and cancers at the forefront of her mind.

Mauréa, a young, Tahitian, anti-nuclear activist, who inherited her passion for activism from her father, struggles in a society where mentioning anything nuclear is taboo. Through Mauréa’s journey we discover a country torn apart by nuclear colonization and an environment rendered vulnerable to plutonium, one of the strongest poisons in the world.

In New Zealand, an anti-nuclear country, we meet Annie. She walks in the shoes of her parents, heroic figures in the peace movement, and instrumental in the condemnation of arms by the International Court of Justice. Annie works to inspire youth towards activism and away from fear and complacency.

These young women introduce us to the film's themes: the rewriting of history for the purposes of political opportunism, the reality of new nuclear arms, planetary contamination, the anti-missile shield program, and peace movements.

From Hiroshima, the Marshall Islands, Tahiti, and New Zealand, to Vienna, Washington D.C., and Vancouver we hear the accounts of scientists, media and political experts, activists, and, of course, the descendants - who cling to the hope that their testimony can free us from the threat of sudden destruction.

Documentary in two parts:
Part 2: May the Bomb Be with You