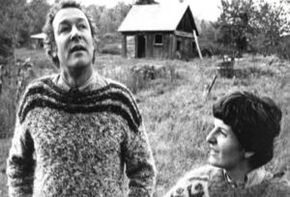 Previously experienced as furtive glimpses through darkened doorways, the world of dementia is becoming increasingly familiar. It is no longer unusual that people live into their 70's, 80's and 90's, and it is among these age groups that Alzheimer's disease and related disorders are most prevalent.

Dementia rises exponentially with age, doubling with every 5 years of increasing age between 65 and 85 years, so that by age 85, more than a quarter of the population meets formal criteria for cognitive disorders.

Despite this pervasiveness, dementia remains mysterious, unfathomable. It raises a host of questions not generally addressed in the medical literature.

The film, Edith and Michel approaches the question of Alzheimer’s through two interwoven narratives, that of the journey taken by Jocelyne Clarke, the director of the film, over a period of 15 years with her mother, and that currently being taken by Edith Fournier, a Montreal psychologist and writer, with her husband, filmmaker/artist Michel Moreau. Their stories and their experiences of accompaniment are quite different, but Common themes emerge in their search for answers.

Edith's story provides a partial answer to one of its central questions: how is it possible to find meaning in such devastating loss, to live well with a disease that insidiously destroys the body and mind, ultimately leaving but the empty shell of a human being?