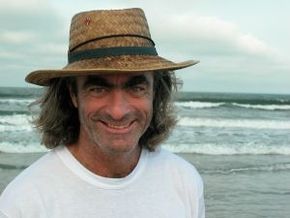 On August 18, 2000, 45 year old, Jean Béliveau took up an unprecedented challenge: go around the world on foot, in one go, without returning home to Canada once. A 75,000 km journey, to which he devoted 11 years of his life.

Racked by a deep existential crisis, this neon sign salesman voluntarily withdrew himself from society in search of the essence of life.

Wings On His Heels introduces us to Jean Béliveau in Brazil, in 2003, at a pivotal moment in his marathon: his final steps in the Americas and his passage to Africa; then, in East Timor, at the end of 2009, after 9 years of walking and more than 60,000 km behind him, steeped in the culture of the 60 countries in which he set foot… Jean Béliveau completed his world-wide walk in Montreal, on October 16 2011.