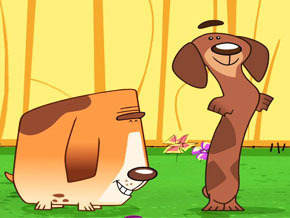 Zippy the Turtle
The dogs are playing in the back yard when Lucas sees a small turtle wander under the fence. The gang is riveted – what is it? Koda says he has seen one before – it’s a turtle. And it looks like a baby one. Lois approaches and the gang immediately takes it in to protect it. They decide to keep it as a pet. Soon they have to adapt all their routines/games/snacks to fit Zippy’s turtly needs. Zippy is with them and at snack and quiet time. And they even pretend they don’t want to go for walkies so they can stay to look after Zippy. But during music time, they sing a song about wild animals needing to be free (or a hear Rosie read a story) and they realize they have to let Zippy go. Just as they are about to, Rosie discovers it. She tells them the turtle belongs in the wild and they all go for walkies after all and take back to the ravine and let it go into the wild where they know it belongs.
Theme: Respecting others

My First Day
When a new little fish is brought to the daycare, it prompts Suki to remember Lucas’s first day. She tells the others the story – in a flash back sequence - of Lucas first day. We learn that Lucas didn’t want to come to daycare at first. In fact, he did everything he could to avoid it. Finally, he agreed to stay if he could bring his owner’s slipper with him. He stayed in the slipper at first, but little by little got used to the daycare as it was great fun and everyone was kind to him. And when Pedro was sad because his favourite Liver Nummie was almost lost, it was Lucas who cheered him up and convinced him how great daycare was. Everyone enjoys the story, especially Lucas who remembered nothing of his first day, as he was so little.
Theme: First day jitters, feeling nervous, anxious and afraid.

Let's Get Ready
Bubu, a little puppy sneaks into to the daycare when his owner is next door at the pet shop. At first, all the dogs are thrilled with him. He’s so cute and active and interested in everything. But soon Bubu, who can’t speak yet, causes trouble. He doesn’t wait his turn, or put toys back, or leave Pedro’s biscuits alone. The others realize that Bubu doesn’t know the rules at daycare yet and they decide to teach him. He’s a quick learner and when Rosie and his owner finally track him down, Bubu shows them how much he’s learned. Rosie says that he is certainly getting ready for daycare and that he can drop in again any time.
Theme: The importance of rules and responsibilities in the classroom