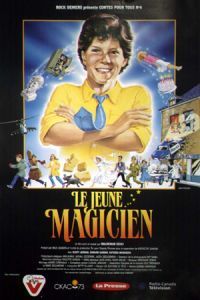 The Young Magician is the story of Peter, a 12-year-old boy who dreams of becoming a magician. One day, Peter discovers that he possesses magical powers: he can move objects without touching them. But to his and his parent's great concern, he doesn't have total control over his special powers. After several mishaps, he meets Alexander. With the help of his new friend, Peter learns to master his power and ultimately, he uses it to save his city from destruction.