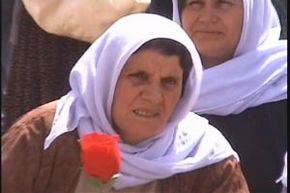 Turkey: Killing in the Name of Honour

Turkey is cracking down on ''custom killing'', making life imprisonment a mandatory sentence. Killing female family members in the name of honour for an injury to the family's standing is a crime emanating from centuries' old traditions. The problem is of such concern to the Turkish Government that in 2006 it set up a Parliamentary Investigative Commission. We discover there is disturbing evidence that tougher sentencing is leading to an increase in forced suicides.

Nimet Cubukcu, State Minister Responsible for Women and Family Affairs tells us: "Every suicide must be investigated carefully as if it is a potential murder." According to UNFPA, as many as 5,000 women, a year, worldwide are murdered in the name of honour.