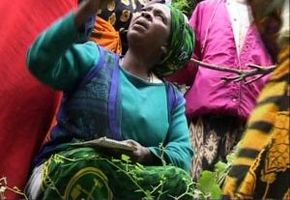 In 2006 Tanzania experienced a stubborn drought. For the first time major rivers stopped flowing and there were water shortages even in the capital, Dar es Salaam. Reliant for half of its power on dams, there have also been severe power shortages.

For TV reporter, Kanky Mwaigomile and other Tanzanians living downstream, the drought came as a wake-up call.

In this installment of VILLAGES ON THE FRONTLINE, we go on a journey with Kanky to the forests of the Eastern Arc Mountains, which she thinks are the water towers for the country. Because of the extent of the devastation at the hands of illegal loggers, charcoal makers and land-grabbers, some villagers, living in the hills, are implementing a long dormant law that gives them the right to take control over their local resources. As a result, new enterprises such as butterfly farming and agro-forestry have started. Will this be enough to safeguard what remains of the forests of the Eastern Arc?